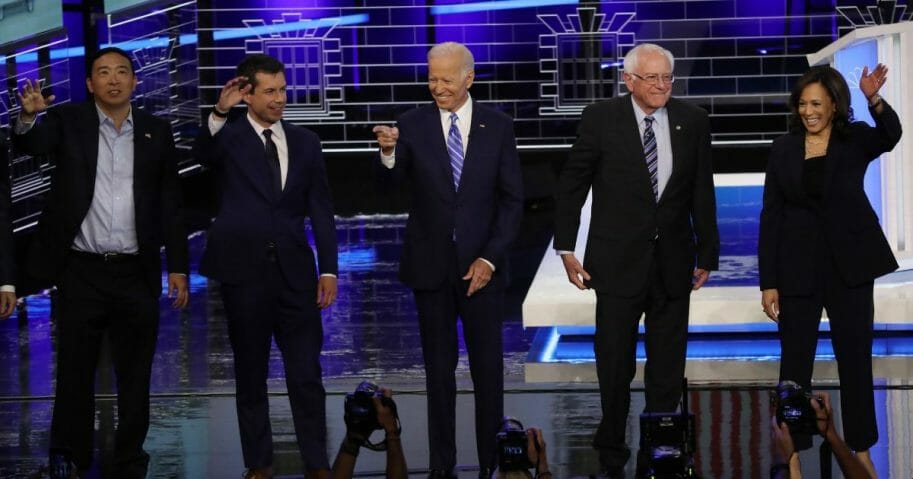 The third Democratic presidential primary debate will take place on Thursday, Sept. 12, 2019, in Houston, Texas. It will be the first time that the top 10 Democratic candidates will be on stage together.

Only 10 of the 20 remaining candidates met the qualifications that the Democratic National Committee announced on May 29, 2019. Candidates had to receive 2 percent or more in four qualifying polls and had to receive donations from at least 130,000 donors, including 400 unique donors per state in at least 20 U.S. states, before Aug. 28, 2019, in order to participate in tonight’s debate.

Who will be participating in the debate?

Colorado Sen. Michael Bennet was among the 10 other candidates who were not invited to Texas due to his inability to met the requirements. According to Politico, he reprimanded the party saying that the qualifications were “stifling debate” and “rewarding celebrity candidates.”

TRENDING: Mnuchin Cuts Jim Acosta Down to Size for ‘Most Ridiculous Question I’ve Ever Heard’

Despite his absence from the third debate, however, he told The Western Journal that he hasn’t become discouraged.

“I think this is the pre-season. I know that if history is any guide, that people who are leading the race today are not going to be the people that end up winning in Iowa and New Hampshire. That never happens,” he said. “I’m not going to let this little bump in the road discourage me.”

Biden is currently the top polling candidate, which may open him up to harsher scrutiny from the other nine candidates, especially Warren who, according to RealClearPolitics, is currently sitting in the number two spot.

Warren is also likely to try to set herself apart from Sanders because of their close polling numbers and similar, progressive views.

Which issues are likely to be discussed?

With the recent destruction from Hurricane Dorian, climate change is likely to be brought up.

Both Warren and Sanders have also expressed their plans to wean the country off of nuclear power use. Warren said she hoped to phase out nuclear power by 2035 at CNN’s recent town hall.

Booker and Yang, however, aren’t as opposed to the use of nuclear power but did suggest exploring new developments in the industry to reduce potential associated risks.

Gun control is also likely to be discussed in light of the recent mass shootings in Texas. O’Rourke particularly spoke out when a shooter killed 22 people and injured 26 more at an El Paso, Texas, Walmart.

We don’t know how many have been killed. We don’t know the motivation. But here’s what we do know: This is fucked up. pic.twitter.com/NRvyPfUjiM

Health care will also likely be discussed, further separating those who support Medicare for all — like Sanders and Warren — and those who propose more moderate options.

When is the debate?