The cartoon below brilliantly sums up the difference between the Republican and Democrat party. 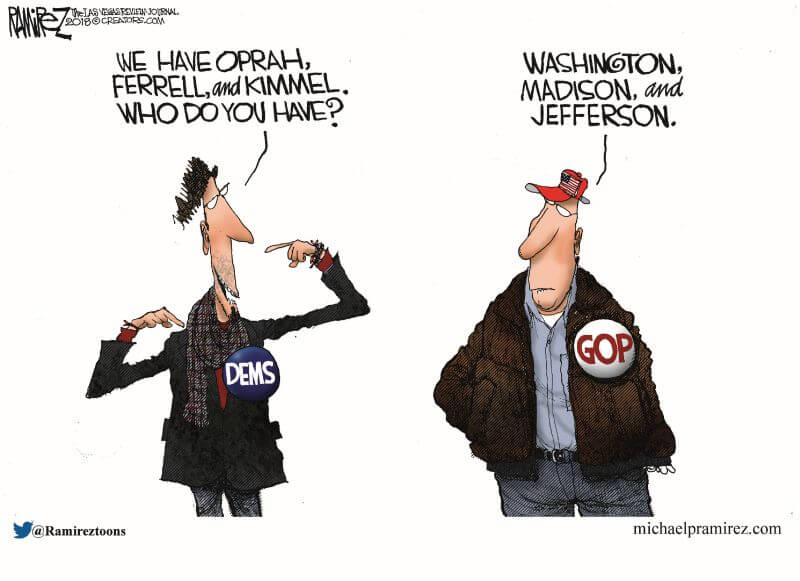 Democrats have Oprah, Kimmel, Hollywood and the mainstream media behind them whereas the GOP has Washington, Madison, Jefferson and the Constitution behind our beliefs.

Which one do you prefer?

Every voter in America needs to see this today!

Democrats are so filled with hate they can’t even see their own hypocrisy on the subject. Here’s an example we pulled from yesterday’s news, but we could find a similar story any day of the week, 365 days a year:

Actor and comedian Jim Carrey, a Canadian, has become famous in recent times for his art depicting the murders of prominent figures including President Donald trump.

And in his latest piece the star of “Ace Ventura Pet Detective” painted a portrait of Alabama Gov. Kay Ivey who signed an abortion bill that angered Democrats.

In response to this bill signing Carrey painted her as being aborted which, of a living human is what is called murder.

The thing is, in looking at Carrey’s portrait of Ivey it shows how atrocious abortion is and serves as a reminder for those who defend it.

“I think If you’re going to terminate a pregnancy, it should be done sometime before the fetus becomes Governor of Alabama,” he said.

I think If you’re going to terminate a pregnancy, it should be done sometime before the fetus becomes Governor of Alabama. pic.twitter.com/6QgsY2rMz7

Thanks for showing how brutal an abortion is, and your support for murder.

At least you seem to know how grisly an abortion is. Your image is accurate down to the abortionist’s cannula suctioning out the brain matter of the fetus, sort of like a serial killer at work. Bravo Jim Carry, you do know what an abortion looks like. Bravo!

The irony of a man for “women’s rights” drawing a cartoon of a woman Governor that signed a law protecting a child in a woman’s womb being killed grotesquely in an abortion and our culture says this is good and doesn’t see abortion as anti-woman.

Yep! We thank Jim Carrey very much! He is helping us show the horror of abortion.

Also @jack @TwitterSupport this is terrifying

This illustrates the horror that is abortion. Thank you.

Wow Jim and not a good wow.

I mean…. look at this drawing…. look at how fucked up abortion is…. I’m sorry but this drawing shows a baby body being sucked out…this is what abortion is….its ugh…thats messed up Jim. I loved you so much as a kid but you have changed for the worse.

Thank you Jim Carrey for showing us what abortion is. https://t.co/zg7kwZewG3

Admitting a fetus is a person to own the Cons https://t.co/zBhGrWq1wy

Regardless of his politics, no one deserves to be mocked and maligned from the public discourse than Jim Carrey. He and his ex-gf Jenny McCarthy did more to mainstream the murderous pseudoscience of anti-vaxxing than anyone else, and somehow he’s never paid public penance for it. https://t.co/MpXebutPD2