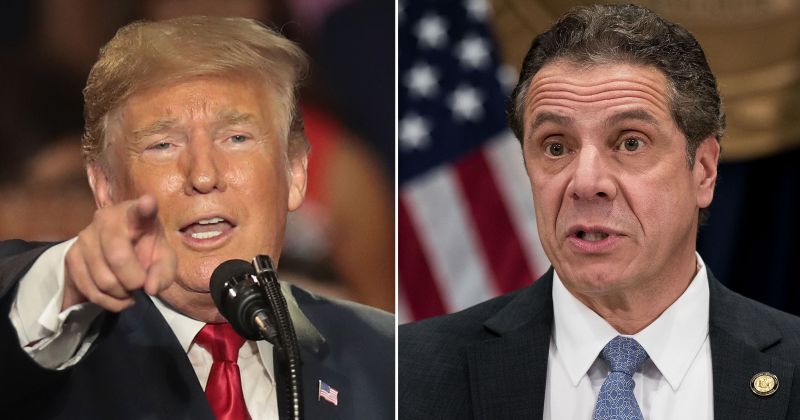 When you stand up for what you believe in good things tend to happen.

Especially when you are a man of strength like President Donald Trump.

Last week, the Department of Homeland Security announced that it would be cutting New York residents out of its Trusted Traveler Programs because of a state “sanctuary” law that prevents the the agency from accessing New York Department of Motor Vehicles records.

The “Green Light Law,” or Driver’s License Access and Privacy Act, is designed to prevent the federal government from finding illegal aliens it has allowed to get driver’s licenses, but the side effect is that the feds also cannot access the records of those applying for the programs.

Now, Democratic New York Gov. Andrew Cuomo has shown a willingness to cave to some of the Trump administration’s demands.

“I’m going to meet with the president tomorrow,” the governor said Wednesday on Long Island News Radio, Politico reported. “He offered a meeting, the earliest availability was tomorrow, and I took him up on it.”

“I will give them the DMV database for Trusted Traveler. These are people who go for an in-person federal interview with all sorts of background information,” Cuomo said.

Of course, Cuomo alone can’t take action to provide the feds with the DMV database.

He would need the state legislature’s support, thought it’s not hard to imagine Democratic lawmakers would fall in line behind him.

Should sanctuary cities be outlawed?

On another radio show, Cuomo was more defiant, saying that his meeting with the president was to call Trump’s bluff.

“I’m calling their bluff by saying, you said you want access to the DMV database for TTP? I’ll give it to you,” he said, according to CNN.

“I don’t believe that’s what they want,” he said. “I believe they just want political noise because they really want to make their argument about immigration.”

Cuomo and his office say they believe the feds really just want access to the DMV database so they can hunt down illegal aliens who have been given driver’s licenses.

“DHS claimed they wanted this information to determine qualifications for the TTP, but it is a sham because they just want access to undocumented immigrants’ personal information, and as the Governor said, we are never going to give them that,” the governor’s communications director, Dani Lever, told CNN.

But with his state’s legal residents likely infuriated by the decision of Cuomo and the Democratic legislature to prioritize illegal immigrants, which will cause travelers to face longer lines at airports and border crossings, the governor’s choices are limited.

“Today, we sent a letter to New York indicating because they took these measures that New York residents are no longer eligible to enroll in these Trusted Traveler Programs,” acting Homeland Security Secretary Chad Wolf said last week.

“They can’t enroll or re-enroll in these Trusted Travel Programs that Customs and Border Protection offers because we no longer have access to make sure that they meet those program requirements,” he said.

“New York’s ‘Green Light Law’ is ill-conceived and the Department is forced to take this action to ensure the integrity of our Trusted Traveler Programs. It’s very clear: this irresponsible action has consequences,” Wolf added in a DHS statement.

“CBP is able to offer Trusted Traveler Programs like Global Entry because we are able to use DMV data to make an evidence-based assessment that those individuals who seek this benefit are low risk and meet the eligibility requirements. Without the DMV information, we aren’t able to make that assessment. We must do our job,” he said.

Cuomo is learning that the hard way.

This article appeared originally on The Western Journal.