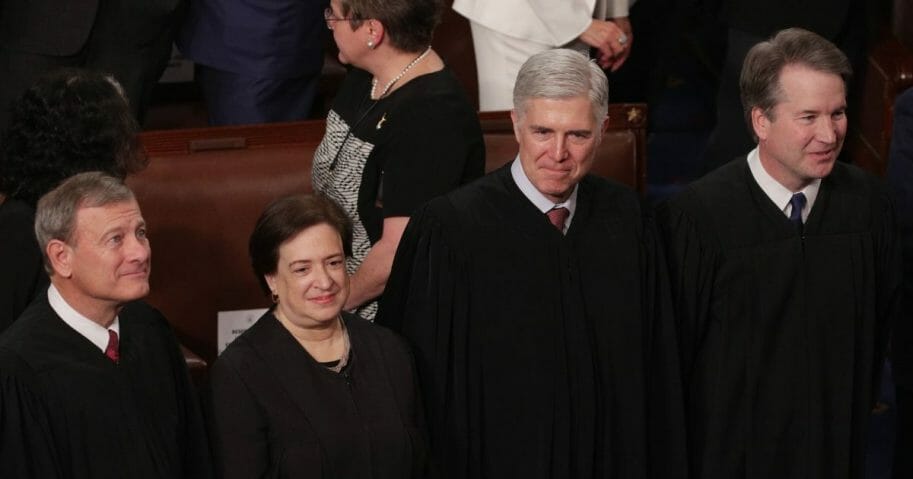 Wall Street Journal editorial board member and columnist Kimberly Strassel highlighted the hypocrisy of Democrats calling for changing the Supreme Court’s composition, contending if President Donald Trump were to do so, they’d “declare him an autocrat.”

Strassel — author of the upcoming book “Resistance (At All Costs): How Trump Haters Are Breaking America” — tweeted on Wednesday, “Anyone notice that when Democrats talk about the need to ‘reform’ the Supreme Court–with court packing–none of them advocate doing it right now?”

Anyone notice that when Democrats talk about the need to “reform” the Supreme Court–with court packing–none of them advocate doing it right now? Imagine if @realDonaldTrump proposed adding five new (conservative-leaning) justices….. Left would declare him an autocrat.

Strassel’s observations came following a Supreme Court brief filed by Democratic senators Monday warning the tribunal it could face restructuring if it “does not heal itself.”

“The Supreme Court is not well,” Sen. Sheldon Whitehouse of Rhode Island wrote. “And the people know it.

“Perhaps the Court can heal itself before the public demands it be ‘restructured in order to reduce the influence of politics.’”

Whitehouse quoted the language of a Quinnipiac University poll finding that 51 percent of respondents favored restructuring the court to reduce the influence of politics.

Do you support changing the number of Supreme Court justices?

“Do you think that the Supreme Court should be restructured in order to reduce the influence of politics, or don’t you think so?” the poll specifically asked.

Sens. Mazie Hirono of Hawaii, Richard Blumenthal of Connecticut, Richard Durbin of Illinois, and Kirsten Gillibrand of New York signed onto the brief, which urged the justices not to take up an appeal challenging gun control legislation passed by the state of New York.

The senators’ apparent implied threat to the court comes after multiple Democratic presidential candidates, including Gillibrand, have expressed an openness to adding to the number of Supreme Court justices to counter the current conservative 5-4 majority.

Supreme Court Justice Ruth Bader Ginsburg recently stated she believes such a court packing scheme would be a bad idea, serving only to make the high court look more political.

“Nine seems to be a good number. It’s been that way for a long time,” Ginsburg told NPR.

“I think it was a bad idea when President Franklin Roosevelt tried to pack the Court.

“If anything would make the Court look partisan,” she added, “it would be that — one side saying, ‘When we’re in power, we’re going to enlarge the number of judges, so we would have more people who would vote the way we want them to.’”

Following Democratic presidential candidates’ talk of increasing the number of justices, GOP Sen. Marco Rubio of Florida introduced a constitutional amendment in March that would keep the number at nine.

The Constitution does not specify the number of Supreme Court justices, leaving it up to Congress to decide by statute.

Since the founding of the republic, the number has ranged from six to 10, but for the last 150 years it has been set at nine.