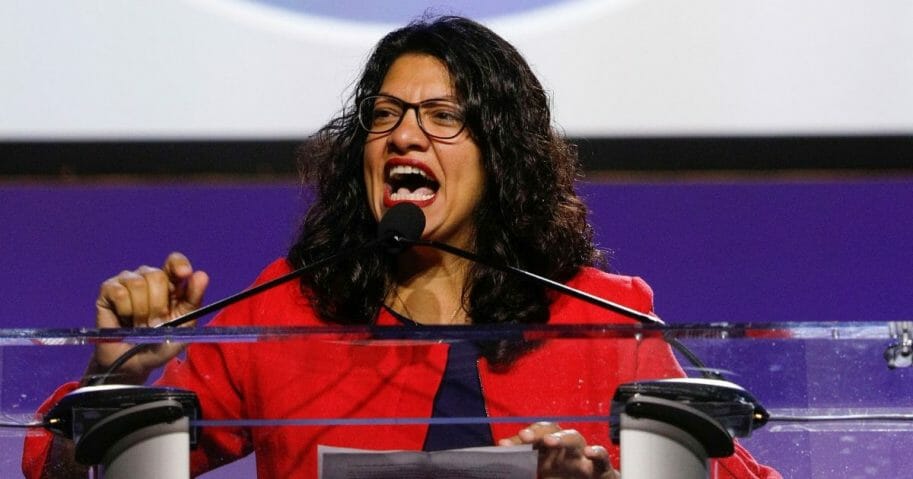 Democratic Michigan Rep. Rashida Tlaib rejected criticism of a radical organization that was scheduled to sponsor her trip to Israel, dismissing the sharp critiques as only “distractions” in a Monday news conference.

Tlaib and fellow freshman Democratic Rep. Ilhan Omar of Minnesota had planned to visit Israel on a trip funded by Miftah, a Palestinian organization with a worrisome history of publishing anti-Semitic statements and praising terrorism.

The Washington Free Beacon reported that an article published by Miftah in 2013 accused “Jews [of using] the blood of Christians in the Jewish Passover,” an anti-Semitic trope.

Fox News noted that a 2006 Miftah report referred to suicide bombers as “women dedicated to sacrificing their lives for the cause.”

While the organization has since apologized for the 2013 article, according to National Review, it has not retracted statements from the 2006 report or issued apologies for other anti-Semitic content it has published.

After being barred from entering Israel in a decision announced by Deputy Foreign Minister Tzipi Hotovely, the pair of Democratic lawmakers held a news conference to discuss their cancelled trip.

When asked by a reporter about criticism of Miftah’s history, Tlaib chose not to address the validity of the anti-Semitism claims.

Responding to the question, Tlaib pinned blame for choosing Miftah on senior colleagues.

Do you think Tlaib was feigning ignorance of Miftah’s history?

“Our colleagues that are senior members — some of them have served multiple terms — actually told us about the organization, you know, we’re not the ones who chose the organization — a U.S. foundation, a U.S.-based sponsor organization chose it,” Tlaib said.

“But I was told by a number — I think there was five members of Congress — that actually went on a trip that was sponsored by the same organization,” the Michigan congresswoman continued.

In addition to absolving herself of responsibility, Tlaib claimed that she and Omar are targets of inordinate media scrutiny — and thus cautiously vet the organizations to which they are connected.

RELATED: ‘I Should Be on a Plane To See Her’: Tlaib Weeps Over Not Seeing Grandmother, Despite Israel Approving Visit

“We’re also taken aback and learn from everybody else that there were some issues regarding it, but again, I think especially Ilhan Omar and I are extremely careful in vetting because there is a close eye in policing of our actions that is so much more weighted on us than any other members. And so we’re very careful.”

Tlaib went on to argue that other Congressional trips to Israel had not received the same kind of media attention.

“When, you know, members from the Congressional Progressive Caucus that both [Omar] and I are extremely active in, have gone to a similar trip — almost similar agenda — we’re as taken aback as you are that people are now questioning that.”

The Michigan Democrat then brushed aside the concerns over Miftah as mere distractions.

“I think these are just distractions into the fact that this had nothing to do, really, with the agenda or these other issues because members of Congress have gone [with] many of these organizations.”

Finally, Tlaib accused Israel of banning her and Omar in order to suppress the “truth” of a Palestinian “occupation.”

“I think the focus is there’s hiding of the truth and hiding that the occupation is happening and they knew us setting foot there would basically bring attention to something that many of us feel is very much against international human rights.”