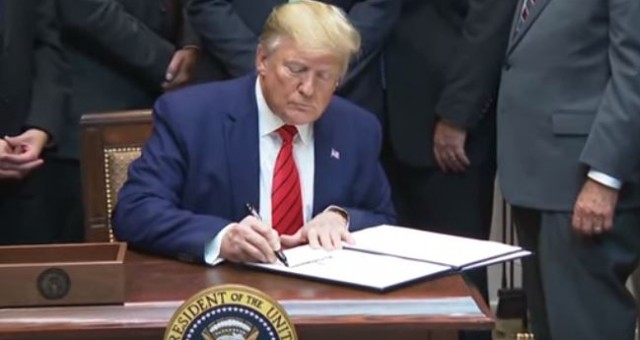 (TNS) Our generation’s George Washington continues to back-hand the bureaucratic deep state in ways that only he could, and far removed from the spotlight because our ‘mainstream media’ is so thoroughly corrupt and in the tank for the Garbage Party most Americans will never know.

On Wednesday President Trump signed a pair of executive orders designed to prevent authoritarian careerists nestled deep inside the federal bureaucracy from running agencies like their own personal fiefdoms.

In particular, Government Executive reported the president “signed two executive orders to restrict federal agencies from issuing certain new rules without going through the normal regulatory process, saying the changes would rein in ‘unaccountable bureaucrats’ who are imposing their ‘private agenda’ on Americans.”

The orders take aim at agency “guidance documents” Trump said have been abused to implement new policies while skirting public comment and review. While the move is the latest in the administration’s effort to slash regulations it says stymie economic growth, critics warned the orders would do away with a key agency tool to quickly protect the public from health and safety risks.

The critics are full of crap. Bureaucrats issue orders mostly to do exactly what Trump said — overburden the private sector with policies put out by the Good Idea Fairy in a one-size-fits-all format that have the force of law, which our founders never intended:

Conservative critics of that process have long argued it instead creates an avenue for “stealth regulations” that impose additional burdens to the constituencies they impact. One of Trump’s orders will require agencies to publish guidance documents online, with anything unpublished automatically rescinded. Agencies will have to solicit public feedback on guidance and face White House oversight. The second order will require agencies to inform individuals of any regulatory case against them, acknowledge any responses from those individuals and educate businesses about any new regulatory impacts.

In a Fox News op-ed, Office of Management and Budget acting Director Russ Vought cited as an example Obama-era guidance that reclassified many independent contractors as employees under the Fair Labor Standards Act.

“This so-called guidance created confusion, raised costs, and drastically multiplied legal liability for businesses,” Vought said. “But the agency did not give businesses or the independent contractors with whom they work the opportunity to provide comment. The agency forced them to comply or face serious reprisal.”

“Unelected, unaccountable bureaucrats must not be able to operate outside the democratic system of government,” Trump said before signing the orders.

Who would have believed before he beat Hillary that Donald Trump understood more about the vision our founders had for our county than all the morons in the Garbage Party and their TV sycophants combined?

This president is busting his butt daily to try and restore some semblance of the republic as founded. But you wouldn’t know it judging by all the propaganda spewed daily by the ‘mainstream media.’ If there is a fifth face added to Mt. Rushmore, it ought to be Donald Trump’s.

This article originally appeared at The National Sentinel and was republished with permission.

*Some edits were made.

Join us at SPREELY if you want REAL NEWS without the leftist censorship!

The leftists at Facebook decided they didn’t like our message, so they removed our page and are censoring us. Help us fight back and subscribe to our newsletter so that you can stay up-to-date with everything Facebook doesn’t want you to see!