The fanatic fringes of the Democrat party are the greatest threat to them gaining control of the White House in 2020.

President Donald Trump has a fantastic economy working for him, conservative justices on the Supreme Court, and is operating a more peacetime military.

Those are the things working for President Trump, but if the Democrats idea of fighting him is to be more extreme they are pushing themselves off a cliff, as this cartoon states. 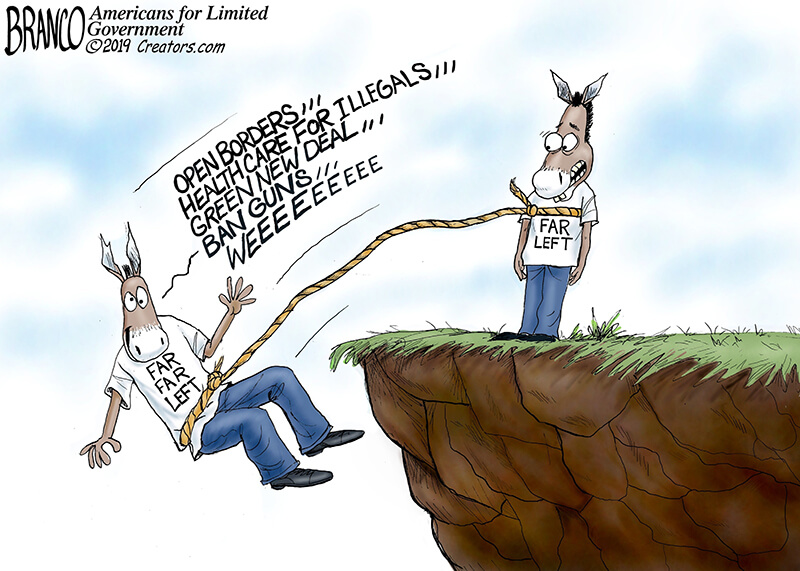 And as the Democrats and progressives work hard to promise as much free stuff as possible it is also their social agenda that is concerning, as this story shows.

Under a new law approved by Illinois Governor J.B. Pritker public schools will be required to teach LGBT history and the contributions of LGBTQ people.

The LGBTQ focused curriculum must be taught before students reach the eight grade and is scheduled to go into effect in 2020.

Are Democrats getting too progressive?

All textbooks “must include the roles and contributions of all people protected under the Illinois Human Rights Act and must be non-discriminatory as to any of the characteristics under the Act,” the bill states.

“One of the best ways to overcome intolerance is through education and exposure to different people and viewpoints,” Democratic state Sen. Heather Steans of Chicago, one of the bill’s Senate sponsors, said in a news release obtained by the Tribune. “An inclusive curriculum will not only teach an accurate version of history but also promote acceptance of the LGBTQ community.”

State Rep. Anna Moeller said in a release that Illinois is the fifth state in the country to adopt a law of this nature.

“The new law’s goal is simple: to understand that people from different backgrounds deserve the same opportunity to learn and be recognized for their contributions in society as everyone else,” Moeller said.

The curriculum will include topics ranging from the country’s first gay rights organization — the Society for Human Rights, launched in Chicago in 1924 — to a spotlight on Sally Ride, the first US woman in space who was also gay, Unilad reported.

Call me crazy but whatever happened to just teaching American history without any biases whatsoever?

Why do certain groups need to be highlighted and lifted up above all others?

This seems like pandering to the lowest common denominator, and hopefully the voters in Illinois reject every politician that voted to make this happen.

Might be time for the parents in that state to rethink their commitment to public education and look into private schools.