Minnesota Rep. Ilhan Omar famously said that “some people did something” on September 11, 2001 when America was attacked.

It was on that day that America changed forever, after Islamic terrorists hijacked airplanes and drove them into the Twin Towers, the Pentagon and a Pennsylvania field.

As this meme shows, the attacks were a ton more than the callous way that the representative described them. 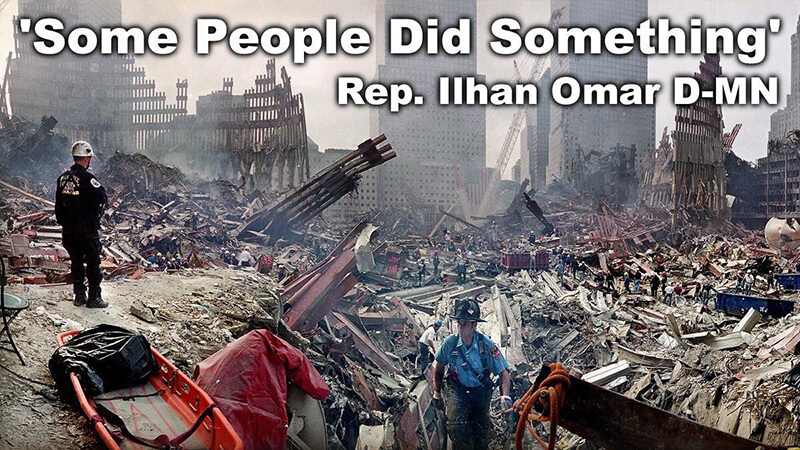 Son Of 9/11 Victim Skewers Omar At Reading of Names Ceremony.

A speaker at New York City’s Sept. 11 commemoration ceremony on Wednesday assailed U.S. Representative Ilhan Omar, a Muslim member of Congress who has often been the target of slurs by President Donald Trump and right-wing media outlets.

The speaker’s remarks were an unusual deviation into partisan politics and religious division at the somber annual ceremony held at the lower Manhattan site where Islamist al Qaeda hijackers flew planes into the World Trade Center in 2001, killing nearly 3,000 people.

Called up to read some of the names of the victims, Nicholas Haros, whose mother, Frances Haros, was killed in the attack, suggested Omar was confused about the nature of the attack. Echoing Trump, Haros also questioned the Minnesota congresswoman’s patriotism.

He has a strong message for Ilhan Omar, who believes that “some people did something.”

Should Omar resign from Congress?

“Madam, objectively speaking we know who and what was done,” Haros said, addressing Omar, who was not present at the ceremony.

“There’s no uncertainty about that. Why your confusion? On that day 19 Islamic terrorists, members of al Qaeda, killed over 3,000 people and caused billions of dollars of damage. Is that clear?”

His criticism lasted for nearly a minute and a half, and drew a smattering of applause.

“Got that now?” he continued, saying al-Qaeda had attacked the country’s “Judeo-Christian” values. “Show respect in honoring them. Please: American patriotism and your position demand it.”

Haros is a Roman Catholic from Ocean County, New Jersey, who evangelizes online through a group he founded called Facebook Apostles.

Omar fled her native Somalia as a child before her family found asylum in the United States in the 1990s. She was elected from Minnesota last November as a Democrat to the U.S. House of Representatives.

Right-wing media outlets have vilified her for her outspoken criticism of Trump’s anti-immigrant and anti-Muslim rhetoric and policies and of the Israeli government’s treatment of Palestinians.

Trump has said that Omar loves and supports al Qaeda, questioned her patriotism and told her to “go back” to Somalia.

The insults have led to an increase in death threats against Omar, her office has said. Omar has openly condemned al Qaeda and its affiliates, calling their members “terrorists.”

Right-wing media outlets have criticized Omar for remarks she made earlier this year about the increased prejudice and state surveillance faced by Muslims in the United States after the 2001 attacks.

She said the Council on American-Islamic Relations (CAIR), a Muslim civil-rights group, was created after the attacks “because they recognized that some people did something and that all of us were starting to lose access to our civil liberties.”

CAIR was founded in the 1990s, and Omar’s office later said she misspoke, meaning that the organization’s reach grew after the attacks.

Shorn of its context, the phrase “some people did something” has been wielded by Omar’s opponents, including Trump, to suggest she diminishes the attack.

At Monday’s ceremony, Haros wore a T-shirt saying “SOME PEOPLE DID SOMETHING?” and a baseball cap advertising his group, Facebook Apostles.

Asked for comment, Omar’s office shared her statement from earlier in the day: “September 11th was an attack on all of us,” her statement said. “We will never forget the thousands of Americans who lost their lives in the largest terror attack on U.S. soil.”

Reuters contributed to this story.