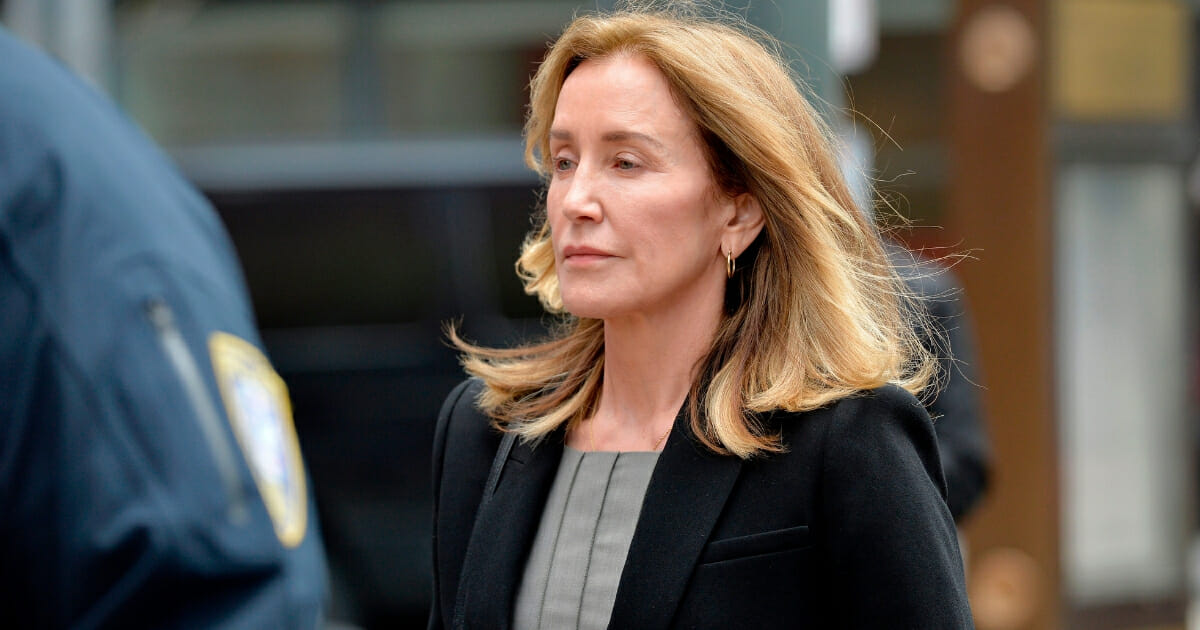 A federal judge on Friday rejected a bid from actress Felicity Huffman’s legal team and sentenced her to a stint of prison time for her role in a college admissions scandal.

Huffman, 56, will spend 14 days in prison, Fox News reported. She must also pay a $30,000 fine and perform 250 hours of community service. She will be on probation for a year.

Huffman’s lawyers had asked that she receive a $20,000 fine along the 250 hours of community service and a year of probation, with no time behind bars.

“I think this is the right sentence here,” U.S. District Court Judge Indira Talwani said Friday in Boston after ordering Huffman to report to federal prison on Oct. 25. “You can move forward and rebuild your life after this. Without this sentence, I think the community around you would ask why you got away with this.”

Talwani also shredded Huffman’s excuse that she was trying to be a good parent.

“Trying to be a good mother doesn’t excuse this,” the judge said, according to CNN.

“The outrage in this case is a system that is already so distorted by money and privilege in the first place. … You took the step of having one more advantage to put your child ahead,” the judge said, according to Variety.

Assistant U.S. Attorney Eric Rosen had pushed hard to have Huffman imprisoned. The prosecution wanted her locked up for 30 days.

“She told you this crime resulted from the bewilderment of being a mom,” Rosen told the judge. “With all due respect, welcome to parenthood. It’s terrifying and stressful. What parenthood does not do, it does not make you a felon. It doesn’t make you a cheat.”

Is this sentence long enough?

Rosen said the scheme to rig the admissions process in which rich families paid fixers to ensure their children were admitted to prestigious colleges was not something that happened of its own accord.

“This was a purposeful criminal act. The defendant knew it was wrong,” the prosecutor said. “She even noted an increase [in payment] could trigger an investigation. She mulled it over. She participated in the scheme. She lied to move the test. She called the College Board to make sure the test had been shipped.

“Happy with the results, she paid Singer $15,000 and considered doing it again.  She sent the scores to colleges nationwide. But for her arrest, she would have succeeded,” he said, referring to William Rick Singer, CEO of a college admissions prep company called The Key. Singer has pleaded guilty to charges for his role in the scheme, CNN has reported.

“This was not a blunder or mistake. This was intentional. She showed contempt for the law and should be punished for her actions. Similarly situated defendants should also go to prison for their crime,” Rosen said.

Huffman had pleaded guilty to one count of conspiracy to commit mail fraud and honest services mail fraud. She admitted paying $15,000 to have her daughter’s SAT exam answers corrected.

The “Desperate Housewives” star made a tearful pitch to the judge prior to her sentencing.

“I’m sorry to you, judge. I am deeply sorry to the students, parents and colleges impacted by my actions,” she said. “I am sorry to my daughters and my husband. I have betrayed them all.”

Huffman said her daughter, Sophia, has asked why she did not think her daughter could make it into a good college on her own.

“I had no answer,” she said. “I can only say I’m so sorry, Sophia. I was frightened, I was stupid, and I was so wrong. I am deeply ashamed of what I have done. I have done more damage than I could ever imagine. I realize now with my mothering that love and truth go hand in hand. I take full responsibility for my actions.”

Huffman last week filed a letter with the court seeking leniency in which she said she was simply trying to give her daughter, who she claimed had a learning disability and trouble doing math, the chance to become an actress.

“In my desperation to be a good mother, I talked myself into believing that all I was doing was giving my daughter a fair shot,” Huffman wrote. “I see the irony in that statement now because what I have done is the opposite of fair. I have broken the law, deceived the educational community, betrayed my daughter, and failed my family.”