Tonight we’ll all be treated to the spectacle of another Democratic Party Debate. That said no one with a weak stomach should watch it as it will be mostly cringe worthy.

The main event will be a showdown between former Vice President Joe Biden and fake American Indian Elizabeth “Fauxahauntus” Warren.

Here in five brutal cartoons is what you can expect to see tonight:

First we can expect to see Democrats talking down the booming economy and predicting an imminent recession, or worse. 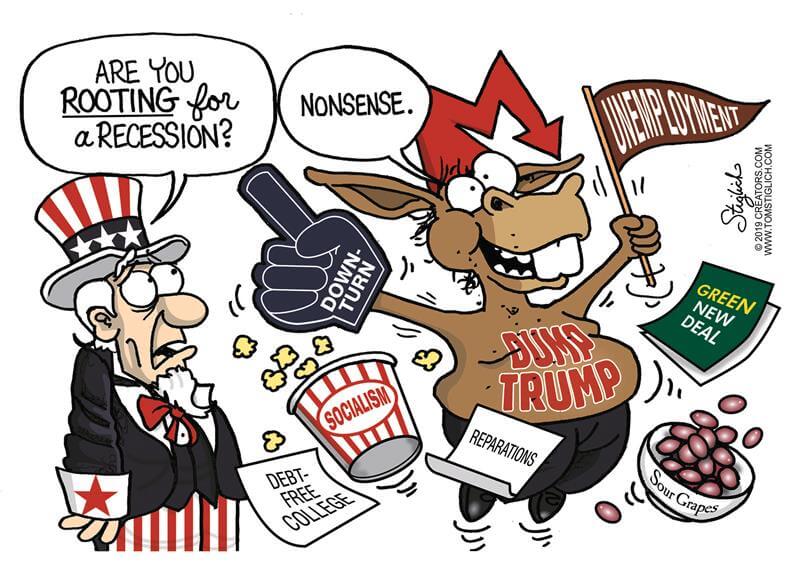 Then we’ll see Bernie and the rest of the 2020 clown show claim Trump is a dictator while trying to regulate and control every aspect of our lives. 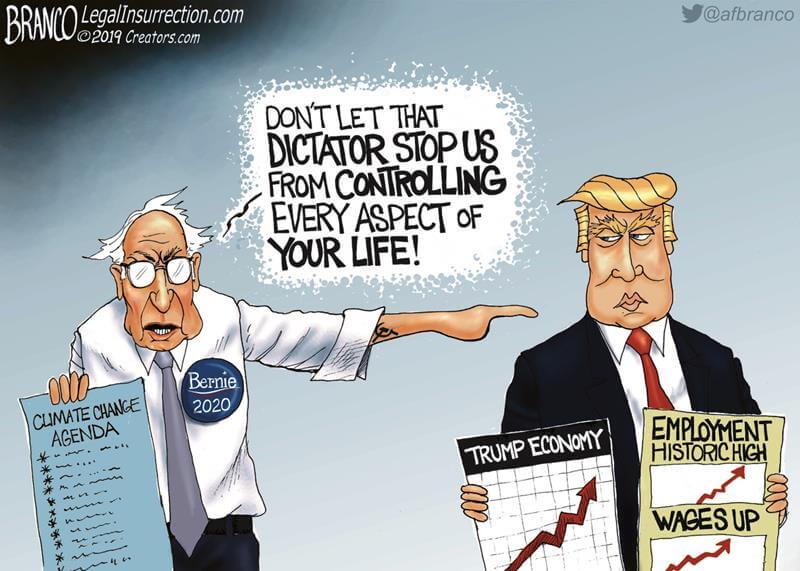 Of course then we’ll hear that unless something is done all life as we know it on Earth will end, or something. 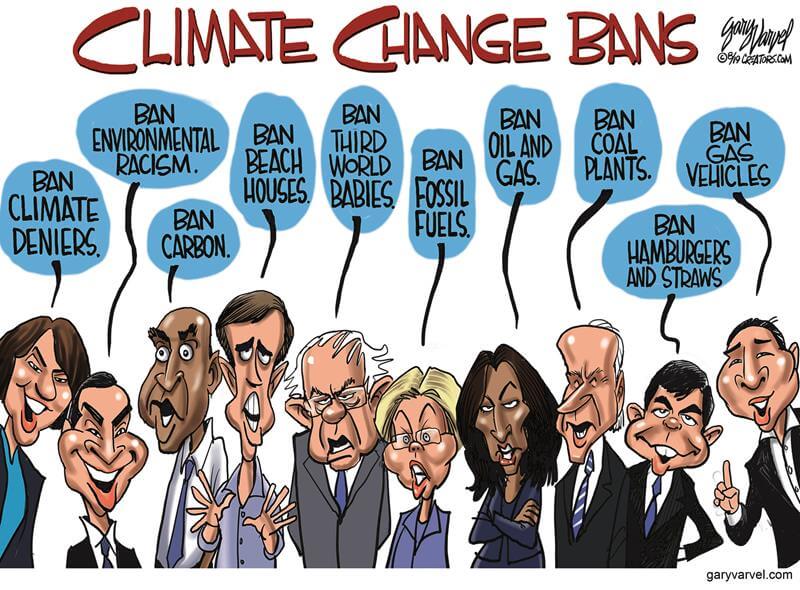 But as you might expect the hypocrisy on climate change by the 2020 clown show is remarkable: 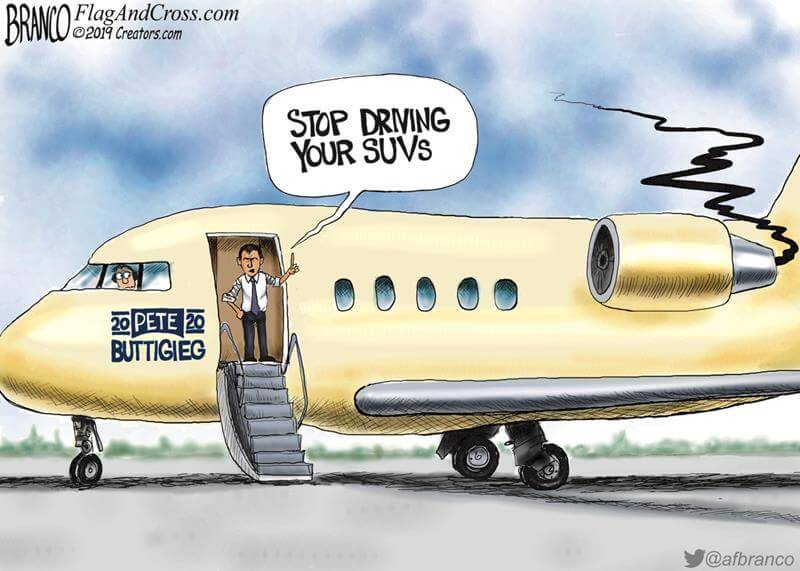 The main thing to watch for however is how the 2020 hopefuls throw poor old Joe Biden off of the cliff. 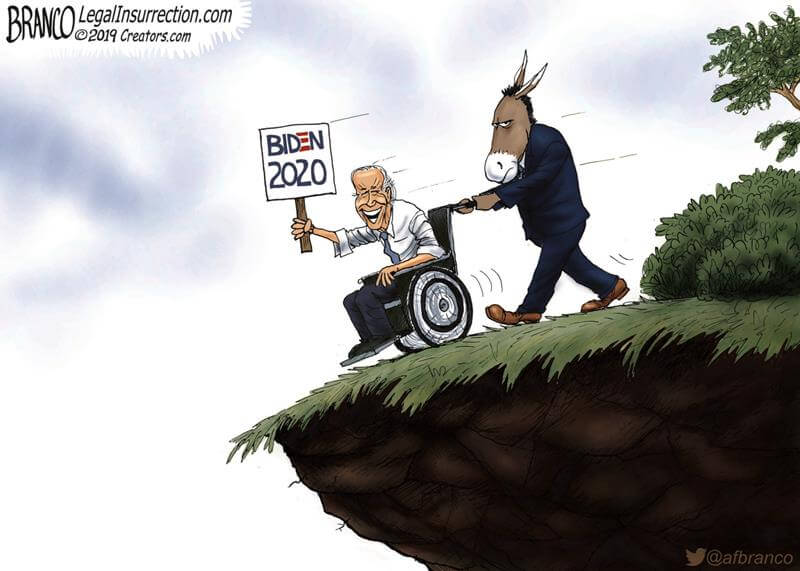 And that in a nutshell is what you can expect for tonight’s Democratic party debate.

“Leading Democratic White House contenders Joe Biden and Elizabeth Warren will share the stage for the first time on Thursday when the top 10 candidates for the party’s presidential nomination meet in a debate in Houston.

Twenty Democrats continue to vie for their party’s nomination to challenge Republican President Donald Trump in November 2020, but party rules about polling and fundraising resulted in only half of them qualifying for the debate in Houston.

All top 10 Democrats will debate, allowing voters to take stock of the leaders side-by-side.

Here are some key moments to watch for during the third Democratic presidential debate, which follows the June debate in Miami and the July gathering in Detroit.

Arguably, the most anticipated of the first-time matchups is between former Vice President Biden, the leader in most opinion polls, and U.S. Senator Warren of Massachusetts, who is nipping at his heels.

The two exemplify the divide between the moderate and liberal wings of the Democratic Party, and the central question in the 2020 primary race: Between pledges to restore pre-Trump normalcy, or embark on ambitious reform, what is a better ticket to defeat Trump in the November 2020 election?

Warren’s recent gain on Senator Bernie Sanders of Vermont in polls has also raised speculation that the two friends and progressive allies could abandon their agreement to not criticize one another.

“In Detroit, those two somewhat teamed up to defend the progressive flag of the party. Given the state of the race today, I will keep an eye on whether Sanders decides to draw a sharper contrast with Warren,” said Joel Payne, a Democratic strategist who worked for Hillary Clinton in 2016.

For U.S. Senator Kamala Harris of California and South Bend, Indiana, Mayor Pete Buttigieg, the debate presents a narrowing set of chances to break through into the top tier.

Buttigieg “needs a moment, he needs to engage in the way that people like and that shows that he’s the kind of person who, for example, could take on Trump,” said Bob Shrum, a political science professor at the University of Southern California and former Democratic strategist.

HOURS WITHOUT A GAFFE?

Biden enters the his third debate atop the field, even after his first two performances were criticized as lackluster and his campaign has fended off questions about repeated misstatements on the trail.

In the second debate in July, Biden embraced his role as the race’s centrist, criticizing opponents for pulling the field to the left.

At that time, Biden benefited from the chorus of other moderates joining his defense. Now, those candidates are off the stage and he may have to make the centrist case himself.

After his rivals at the last debate in Detroit challenged his record as vice president to former President Barack Obama, Biden is prepared to defend Obama’s legacy, a Biden adviser said.

Unlike the last two debates where only a fraction of time was spent on debating foreign policy, more substantial discussions are expected this time given Trump’s “missteps,” the adviser added.

On Tuesday, Trump fired national security adviser John Bolton amid disagreements over how to handle foreign policy challenges such as North Korea, Iran, Afghanistan and Russia.

Biden, 76, has also faced questions about his age and whether he has the stamina for a lengthy and taxing presidential race. In Houston, he will stand next to Sanders, 78, the oldest candidate in the field.

“Biden will likely continue to take a page from Donald Trump in 2016. If you’ll remember, Trump essentially, just treaded water in the debates,” said Payne.

“He never won any debate but he managed to stay above the fray. Biden is likely hoping that he can ride a similar strategy to get through a splintered Dem primary.”